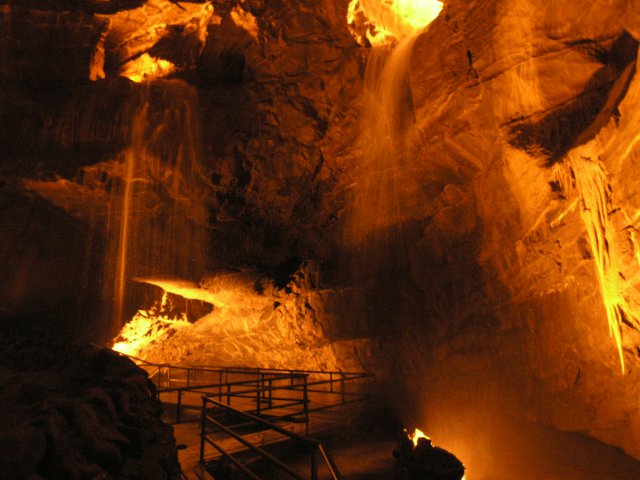 The Dan yr Ogof Caves were first discovered on 27th December 1912, by Tommy and Jeff Morgan, who were trying to find the source of the river Llynfell that flowed through their farm land at the base of the cliffs at Dan yr Ogof.

The brothers had tried previously but had been prevented from penetrating far into the mountain by a large lake. Undeterred they returned with coracles, candles, a piece of rope and an old revolver, using arrows in the sand to find their way back.  They crossed not one lake but four and discovered a labyrinth of caves, passages and chambers, a 330 million years old wonderland of stalactites and stalagmites.  They were eventually stopped by a small passage that was too small to crawl through.

Not long afterwards, they started charging a small entrance fee to take people into the caves by candle light and opened the caves properly to the public in 1939.  However, during World War II,  the government closed the caves down and used them to store ammunition and works of art. Water from the caves was also piped to Swansea when the water mains were damaged by bombs during the blitz on the city.

In 1963, a local girl called Eileen Davies, a member of the South Wales Caving Club, managed to crawl further into the caves, to discover over 10 more miles of caves and passages, with expert cavers believing that there are still more to discover. John Charles - former Wales soccer international, who is considered by many to have been the greatest footballer that Britain ever produced.  He was a world class centre-half or centre-forward, who could also play full-back or midfield, if required.   At 6ft 2ins and 14 stone, Charles had an tremendous physique, but he was also extremely agile for a big man.  He possessed a delicate first touch, good control and was masterful in the air.  There is no comparable player with that kind of versitility in the history of the game.

Following his transfer from Leeds United to Italian giants Juventus in 1957, he became probably the most successful import to Serie A where his name is still revered. On 27th December 2013, Maria Leijerstam from the Vale of Glamorgan became the first person to cycle to the South Pole.  The 500 mile journey took her 11 days to complete. Born on this day 1972 in Sutton Coldfield, Birmingham Dinefwr Castle, associated with the princes of Deheubarth, occupies a place of great affection in the minds and traditions of the Welsh people.  It lies on a steep ridge near Llandeilo overlooking the River Tywi.

A timeline of the history of Dinefwr Castle;

c. 871 - Traditionally, a castle was first constructed  by Rhodri the Great.

c. 900 - Dinefwr became the chief seat of Rhodri's grandson Hywel Dda, the first ruler of the Kingdom of Deheubarth and also most of Wales.

1197 - On Rhys ap Gruffydd's death the castle passed to his son Rhys Gryg.

1233 - When Rhys Gryg died his son Rhys Mechyll inherited Dinefwr and his other son Maredudd inherited Dryslwyn, only five miles away.

1244 - When Rhys Mechyll died, his son Rhys Fychan allied with King Henry III of England against Llywelyn ap Gruffudd who was supported by Maredudd.

1257 -  Rhys Fychan accepted Llywelyn as overlord and had his lands, including Dinefwr, restored.  Maredydd, in turn switched sides and paid homage to Henry III.

1277 -  King Edward I of England invaded Wales and captured Dinefwr.  The castle was put into the custody of a constable.

1316 - The castle  burnt during the rebellion of Llywelyn Bren.

1317 - The castle was given to Hugh Despenser, the favourite of King Edward II of England.

1403 - The castle was unsuccessfully besieged by Welsh forces during the rebellion of Owain Glyndwr.

1467 - Dinefwr was in the possesion of Sir Rhys ap Thomas, who marched with Henry VII against Richard III and was instrumental in Henry's victory at the Battle of Bosworth Field in 1485.  The poet Guto'r Glyn implies that Rhys himself was responsible for killing Richard with a poll axe.

1531 - Rhys ap Thomas's grandson was executed for treason and the castle was confiscated by the crown.  The family were later able to recover it, but abandoned it in 1600, for a new house built on the site of the present Newton House.

The castle is now under the ownership of the Wildlife Trust of South and West Wales and managed by CADW on their behalf. On the third day of Christmas, my true love gave to me - Three French hens.

There is certainly no shortage of French or other types of hens in Wales and they have been around for a long time.

The chicken is regarded as the first domesticated animal, the first bird and consequently, the first descendant of the dinosaurs.  They were first domesticated from the Indian and Southeast Asian red jungle fowl and appear in China about 6000 BC and in India about 2000 BC.  There are artistic depictions of the bird adorning Egyptian royal tombs and they are recorded as accompanying Roman armies, where apart from being an important part of the diet, their behavior was carefully observed before battle, with a good appetite indicating a likely victory. According to Cicero, when one contingent of hens refused to eat before a battle at sea in 249 BC, the angry consul tossed them into the sea. History records that he was defeated.

The rooster plays a crucial role in the Gospels in helping to fulfill the prophecy that Peter would deny Jesus “before the cock crows.” and Pope Nicholas I, ordered in the ninth century that the rooster should be symbolized on top of every church as a reminder, which is why some churches have cockerel-shaped weather vanes.

The fact is that the male of the species can be quite a fierce animal, meant that they have been bred and trained for fighting and in the parts of the world where it is still practiced, it has claims to being the world’s oldest continual sport.  Cock-fighting was outlawed in Britain in 1849 and the idea of exhibitions took root as a way of continuing competition, with the first Standards being produced in 1865 for just a handful of breeds to try to maintain uniformity.  Then at the turn of the century, with the importation of breeds from the continent and America, the number of traditional and hybrid breeds increased dramatically.