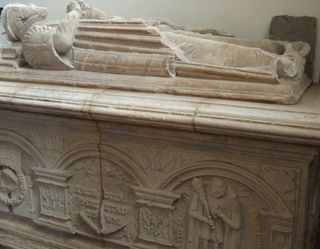 David Lewis , born in Abergavenny in 1520 was a lawyer and personal advisor to Queen Elizabeth I. He was also Member of Parliament for Monmouthshire, and a Judge of the High Court of Admiralty. He was one of the founding members of Jesus College, Oxford and, on 27th June 1571, became its first Principal. On this day in 1997, the SWALEC Cup final between Cardiff and Swansea was the last ever match to be played at the National Stadium in Cardiff.

* The National Stadium was often mistakenly referred to as Cardiff Arms Park, which is the smaller ground next door where Cardiff Rugby Club play .

* It holds the world record for a rugby union club match when a crowd of 56,000 watched the 1988 Schweppes Cup final between Llanelli and Neath.

* It held the first evening game to be played under floodlights on 4 September 1991 between Wales and France. On this day in 1930, Dylan Thomas made the first entry into his poetry notebooks while he was still a pupil at Swansea Grammar School. The first poem, dated 27 April, is entitled "Osiris, come to Isis." Pete Ham , who was a rock singer, songwriter and guitarist, best remembered as lead singer of the 70's rock group Badfinger. He also co-wrote the ballad "I Can't Live (If Living Is Without You)" a worldwide Number One hit for Harry Nilsson for which he won two Ivor Novello Awards. Stephen Russell Davies OBE , better known as Russell T Davies, a television producer and screenwriter whose credits include Queer as Folk, Torchwood, Casanova and the 2005 revival of Doctor Who. Born on this day 1928 in Fochriw near Caerphilly,

Selwyn Hughes , a Welsh Christian minister who was well know for producing the daily devotional 'Every Day with Jesus'. George Carey, the former Archbishop of Canterbury, described Hughes as a "giant in the faith".