THE "LAST INVASION OF BRITAIN" 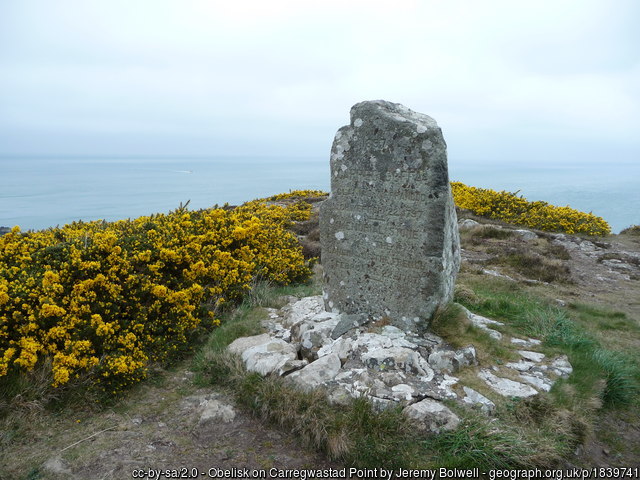 Memorial stone at Carregwastad Point of the landing of the French on February 22nd 1797. On 22nd February 1797, 1,400 members of the French Legion Noire of the French Revolutionary Army landed in Carregwasted bay near Fishguard and it remains the last time that Britain was invaded a foreign military force.

Irish revolutionary leader, Wolfe Tone had received support from France to help end British rule in Ireland.  Part of the plan was to organise French invasions of Britain to divert and weaken the British forces, with the overall aim of sending a much larger force to Ireland to overthrow the British there.  However bad weather and poor organisation resulted in only the invasion through Wales to target Bristol and the west of England, going ahead.

The invasion force was led by an Irish American colonel, William Tate and consisted of 1,400 men, nearly half of whom however were deserters and convicts. An initial attempt to land was unsuccessful due to the defensive cannons at Fishguard fort, so the fleet landed 3 miles away in the bay at Carregwasted under the cover of darkness. They moved inland and established their headquarters at a nearby farmhouse, but the convicts and pressed men deserted, got drunk and ran away. The next morning the French moved inland and occupied strong defensive positions on high rocky ground. Meanwhile, the British, although outnumbered, decided to attack, with many Fishguard locals volunteering to fight, notable among whom was Jemima Nicholas, who single-handedly took twelve French soldiers prisoner in St Mary's Church armed only with a pitchfork.

These actions convinced Tate that although he had much the superior forces, he had to accept an unconditional surrender and the following afternoon the French laid down their weapons on Goodwick sands.

WILLIAM FITZOSBERN MADE EARL OF HEREFORD FitzOsbern is known to have fought at the Battle of Hastings in 1066 and after the Norman conquest, William the Conquerer placed three of his most loyal companions as the Earls of Hereford, Chester and, Shrewsbury,  namely, William FitzOsbern, Hugh d'Avranches and, Roger de Montgomerie.

These areas became known as the Welsh Marches and were established as autonomous regions with their own laws and customs, with the aim of bringing Wales under control. They absorbed towns and villages and FitzOsbern began by invading and conquering Gwent.

FitzOsbern also built many castles, including those at Chepstow, Wigmore, Clifford, Berkeley and Monmouth, as well as  improving the defences of the towns of Hereford and Shrewsbury. Williams was known as "the prince of centres" and was the last man to captain Wales to victory over New Zealand. He served during the Second World War with the RAF and afterwards became a rugby journalist with the Sunday People. In February 1894, Ysgol Syr Hugh Owen in Caernarfon became the first intermediate school to open in Wales under the Welsh Intermediate Education Act of 1889.

The school is named after the education reformer Sir Hugh Owen, who recognising the need for improvements in education in Wales, was instrumental in the demand for action from the government.

Prior to this, the education of children up to the school leaving age of 10 was the responsibility of local school boards, but the new legislation replaced them with joint education committees in every Welsh county, responsible for establishment of the new intermediate schools

The aim of the intermediate schools was to provide education for children irrespective of their families social status or religious denomination. The leaving age was raised to 11 and later in 1899, to 12. However, initially the schools required a financial contribution from the parents, but as many were not able to afford it, by 1891 the children's education was provided free of charge. The new schools became known as county schools until the 1944 Education Act created the system of grammar, secondary modern and technical schools. The canal and its horse-drawn tramway provided a means for local industries, such as coal and ironstone to transport their goods through the narrow Mid Wales valleys. However the arrival of the railways saw their usage decline, and by 1865 the Monmouthshire Canal closed, which was followed by various other parts of the canal being filled in for road construction, leaving it effectively unnavigable.

However recent restoration work has seen sections of the canal reopen, in particular, the stretch from Brecon to Pontymoile.


Thanks Harold, its nice to have feedback from the posts. I am enjoying doing and researching them, they are helping me in giving a structure to my knowledge of Welsh history and making me realise I didn't know as much as I thought. As for the Fishguard invasion, you are totally correct. I lived in Fishguard for a while and it is more of a claim to fame rather than a serious military event, it was a poorly organised event that turned into a drunken damp suib. However it does highlight the fact that there was revolution in the air in Ireland specifically, I think that they assumed that the Welsh would roll in behind it, where a political approach may have served them better. We Welsh have a history of having to deal with invading forces and how we have dealt with them, may make up part of our national character. However thats a complicated one and maybe a discussion group on it's own


Huw, I cannot tell you how much I appreciate your daily contribution to this site!

I have often heard historians cite this minor skirmish in 1797 as the last foreign invasion of British soil, but...

It is accurate in only one sense: From a strictly semanticpoint of view. I think historians have to recklessly disregard modern definitions of sovereign soil by disallowingairspace and coastal waters from that equation. TheLuftwaffe quite successfully invaded British airspace in WW-I and WW-II exacting terrible damage--far worse than this failed invasion could have or would have produced. On the opposite side of the world, the Japanese occupied Hong Kong. a British colony, and killed many British subjects and defenders. More recently, the Falkland Islands, also a British territory was invaded andoccupied--just to name a few possible exceptions.