In some areas of Wales, the tradition of observing the new year according to the Julian calendar is continued, with the communities of the Gwaun Valley near Fishguard and Llandysul celebrating the   ‘Hen Galan’ hen meaning old in Welsh and calan, meaning the first day of the month. Born on this day 1804 in Llangeinwen, Anglesey'

Sir Hugh Owen - Founder of the University College of Wales at Aberystwyth and pioneer of higher education in Wales.

Owen moved to London when he was 21 and initially worked as a solicitor's clerk, before finding work with the Poor Law Commission and eventually becoming its Chief Clerk in 1853.

Whilst in London, he became associated with the British and Foreign School Society and seeing its potential for Wales, he was taken in 1843, to writing an open letter to the people of Wales, suggesting the establishment of such schools in Wales.  He was subsequently involved the appointment of agents for the society in both North and South Wales.  He was also the secretary of the non-denominational Cambrian Educational Society and wrote another letter, suggesting the introduction of their day schools in Wales in 1846.

His innovative ideas highlighted the need for teacher training in Wales and he therefore became involved in the foundation of the Normal College at Bangor and the raising of funds for a University for Wales.  In 1867 the fundraising committee he had established was able to buy the Castle Hotel in Aberystwyth as the site for a University, which was opened 1872. Born on this day 1911 at Cockett in Swansea,

Edward George 'Taffy' Bowen - Physicist whose work on radar enabled the Royal Navy and RAF  to break the Germans navy's stranglehold over the north Atlantic during World War II and whose breakthroughs in the field of electromagnetism  would  change the course of peoples everyday lives.

Taffy was born into a working-class family, but from a very early age, his high intelligence marked him out for great things and at the age of 9 he'd already built his own valve radio transmitter.  He joined Swansea University aged 16, he had his MSc  by 19 and was a professor aged 24.  Then in 1935, Bowen's brilliance brought him to the attention of the inventor of radar, Scottish scientist Robert Watson-Watt.   Bowen managed to miniaturise radar into something that could be fitted into the noses of planes during the Battle of the Atlantic. 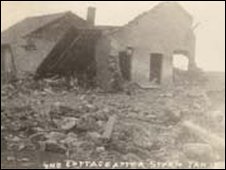 Between 14th - 19th January 1938, a major storm caused extensive damage in Aberystwyth, with the promenade and pier being largely destroyed by 90 mph winds.

The promenade collapsed and was washed away in minutes.  Wave after wave entered houses flooding the basements to a depth of several feet and smashing all furniture before them.  Front doors were smashed to matchwood as boulders and paving slabs were hurled against them and large stones were driven against windows up to second-floor level, breaking the glass and letting in gallons of water.

At nearby Tanybwlch beach, three women decided to abandon their cottage and seek refuge with their neighbours when the front door was burst open by an enormous wave.  The next wave brought the roof down, pinning two of the women firmly under the heavy roof beams, with the third being knocked clean out of the cottage, only feet from the swollen River Ystwyth.  Their plight was noted by the driver of a passing train, who raised the alarm, allowing the emergency services to free the women from the wreckage.

Work rapidly commenced on a protective coffer dam and the rebuilt promenade was well protected by an apron of boulders.  It was thought that the expensive lesson of 1938 had been well and truly learnt and that a repetition of the events of seventy years ago were a near impossibility.  However, the recent storms in January 2014 have showed that there is no room for complacency when dealing with such forces of nature.


Fascinating....diolch for posting Huw. I had to look up the history of the adoption of the Gregorian calendar and it seems that it was a long,confused and confusing process:- http://www.hermetic.ch/cal_stud/cal_art.html#Adoption