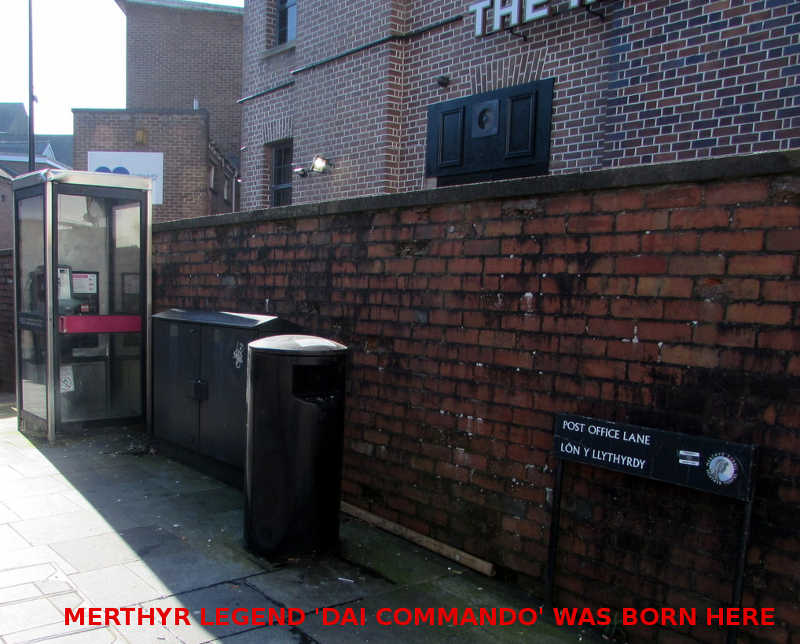 But underneath he was no ordinary G.I. Joe.

You would never hear it from Dai’s own lips, but the regulars in his local public house in Dowlais- the T.A.’s (The Tredegar Arms) would tell you- whilst he may have served in the Royal Marines – ‘He was Made in Merthyr’.

Mainly because he was conceived on top of a wheelie bin behind Wetherspoon’s in Post Office Lane.

Dai Commando turned his I-pad on ready for his 11.00am Zoom Meeting.

It was top secret and confidential stuff.

Punctually was Dai’s middle name and he hated people who were late even more than he hated foreigners- and that was saying something.

After inputting his own version of the Enigma Code into the Apple device, he promptly ate the piece of paper that contained the sequence.

Up on the split screen appeared three men, two of which most people would recognise from television and the other as anonymous as an alcoholic deed poll clerk.

“Good Morning Mr Perkins!” said the figure on the left of the screen.

Dai’s commando training noticed that the background behind this man was very bland indeed.

Magnolia walls and no discernible trace details of the location.

The middle man had a mop of unkempt blonde hair and appeared a little of out his comfort zone.

He was sitting on a green leather bench reminiscent of those that MP’S sit on in the House of Commons in Parliament and immediately sticking out from underneath him was a thick document marked ‘Russian Report’.

The third individual had bulging eyes and looked like a human version of a frog.

Behind the human Freddo was a huge bookcase with an array of books thereon with Mein Kampf, Der Fatherland, Uncle Tom’s Cabin and the Al Jolson Story clearly visible.

“For the purpose of this interview, please refer to us from left to Far Right as Philby, Boris & McLean!” continued the Oxbridge voice.

“So, Mr Perkins…. if that is indeed your real name…the big question is why do you want to register as a spy with MI5?”

Dai Commando had wanted to be a spy his entire life.

Now in one 30-minute interview, he had to justify exactly why that was to people far less qualified than himself.

“My name is not important, I just want the opportunity to continue the excitement of foreign travel and the kind of freedom of movement that has been curtailed following the EU withdrawal bill and not to have a 14 day quarantine period just like Pa Churchill…. I want the ‘buzz’ of the chase- but more importantly I want to be licensed to kill like the Russians over Litvinenko or any member of the Saudi Consulate in Istanbul!” said Dai.

“I get aroused by foxhunting too but may I suggest the DWP rather than MI5 if you really want a licence to kill a much greater number?”

“Austerity can only last for so long, before the general public rumble you-I want the adrenaline rush of defending these shores from Foreign influence and carry a knife in London without being stopped and searched every ten minutes!” replied Dai.

“Are you prepared to place a limpet mine on the bottom of a refugee boat in the middle of the English Channel?” asked McLean.

“Do you want me to beat the ‘Living Daylights’ out of George Galloway too?”

“Sounds like my kind of man…your hired… let’s all meet down the Saracen’s Head for a pint then!” said McLean.

“Not so fast…I have a few questions before you begin Putin Britain First!” said Philby with a Freudian slip.

“Why are you dressed as a Babushka woman from the Motherland ?” he continued.

“I am incognito!” replied Dai.

“Great- he can speak French too, pub it is then!” said McLean licking his frog-spawn like lips.

“Whoa, hold your chevaux-what experience had you had in such stealth matters?” asked Philby of the Babushka.

“I served in the Special Boat Service, did two tours of duty in Iraq- I am pictured on the internet- in disguise of course- helping the locals pull down the statue of an evil man with a rope - !” replied Dai.

“I served in Afghanistan too- where I had my leg blown off by an IED-!” said Dai lifting his long hippy skirt to reveal a metal leg and curved Oscar Pistorius scimitar foot and a fine pair of bollocks too.

The reaction on Boris’s face was priceless, as he recoiled in horror.

“Don’t let this little thing put you off hiring me- this is like a Swiss Army blade and contains a bag of killing tools that Villanelle in Killing Eve would die for!” said Dai Commando.

“See this sonic screwdriver attachment…I once killed a man with it on the Jeffrey Epstein’s ‘Lolita Express’ private jet and then used this handy Dyson attachment to ‘hoover’ up his remains before dropping them Mid-Atlantic into the sea!” boasted Dai Commando looking like a QVC salesperson.

“How did you get on that plane?” Asked Boris....I heard it was reserved for Royalty and had a 14 year old waiting list?”

“It was full of shady characters that you expect to see as Bond Villains in Spectre…there was definitely more than an Oddjob or two going on by the cabin crew- ‘bobbing for diamonds’ – after all they do say diamonds ARE forever!”

“I really miss the other Old Boy Network!” sighed Boris.

“But now I have a new born one- year old gargantuan baby and a puppy to support- handy for the election photographs but hard work for Nanny Carrie ever since!”

“Times are hard, with half the Country unemployed after the Pandemic and Brexit fiascos, I can’t even afford to re-join the Bullingdon Club and burn £50.00 notes in front of the homeless anymore on my ‘chickenfeed salary’…I wonder sometimes if it REALLY was worth avoiding the EU Tax Directive after all…I blame David Cameron for his pig’s breakfast and the entire Eton Mess!”

All the while the real Head of MI5- known professionally as Malcolm X- sat silent.

He knew he could kick up a fuss like Rosa Parks on a Cleveland Avenue bus but just like the work in progress on the Civil Service- his secret organisation would be disbanded by the real hand that rocked his cradle- Countryman and Comrade Dominic Cummings.

“Cummings?....is that the Guy who writes for the S*N newspaper on page 5 every week or am I thinking of a different Fifth Columnist? ’

“Out of curiosity… was that Fat Cabbage guy on there?” interrupted Boris nervously.

“You know.... the one that produced the Bondage Films?” continued Bo Jo.

“I think so….I will check this little black book I copied on my mobile camera-phone lifted from the Maxwell House….let me see in the A-listers we have Allen (Woody), Andrew also filed under H and even more Woody…Bill Clinton, Bill Cosby, Blair…sorry I can’t see any Broccoli….although it appears that some of them did have their five a day and some as many as eight!” replied Dai Commando squinting at the allocated lists of Octopussy.

“Can you turn that phone to the screen?” asked McLean.

Commando Dai being in an interview wanted to give his intended new employers what they wanted to both hear and see.

“I wonder what the phrase had a B.J. stands for?” asked McLean innocently.

“What time does that Pub of yours close?” said Boris trying to change the subject.

“The Saracen’s Head you mean?” asked McLean thoughts turning automatically to being given head.

“Can we get back to the task in hand Gentleman?” ordered Philby politely.

“So what makes you think you are the best man for the job over Idris Elba?” asked the MI5 Chief.

“This IS a secure link is it Sir?” asked Dai Commando.

“Only our friends at the CIA, Microsoft, Apple, Google and Siri have access to this network- so it is unlikely to be shared anywhere- please be assured- it is as safe as Jennifer Lawrence’s I-Cloud!” said Philby.

“Well I possess a Polonium 210 tipped Umbrella, some Novichok cakes and a phial of Covid 19 that our lab techs created at Porton Down research place to f*** up the Chinese economy!” said Dai Commando.

“I also do the Thunderball lottery religiously every week!”

“Pub anyone?” he continued looking at his Swiss watch and both his British Blue and Red EU passports.

“Do I get a certificate marked Cobra meeting for the haters?” he continued.

“One final question- Mr Perkins if I may?” asked Boris.

“How would YOU stop Russian infiltration of the Security Services producing fake election results in the UK?”

“Asking for a friend of course!”

“Read Peter Wright’s banned Spycatcher book- don’t employ people on your staff people who have worked in Russia for three years, don’t except donations from oligarchs for party funds, don’t play tennis against anyone wearing a sickle n hammer tee-shirt instead of a Fred Perry one and make sure the only Computer Haka you allow into the civil service is a Rugby- playing one!”.

“That way just like Jennifer Arcuri you will stay top of the polls and won’t suffer a ‘Skyfall’ replied Dai.

“Employ me because I am not easily shaken or stirred!”

“After all my word is my Bond!”