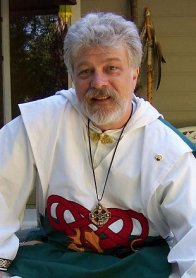 — Adapted from various sources, including “Celtic Myth and Legend” by Charles Squire, originally published in 1905.

The Milesians, the ancestors of the Celts, had by this time reached Spain.  It happened that a Milesian named Bregon built a great tower, and one day one of his sons, named Ith, sighted a far-off land across the seas.  This land had been unknown to the Milesians and Ith set sail to find and explore it.  Ith landed on the west coast of Ireland and met three Tuatha kings, grandsons of the Dagda.  When Ith praised Ireland very highly, the kings became afraid that Ith’s people would invade their land and so they killed him.  Ith’s companions returned to Spain with his body, and the Milesians set sail to exact revenge on the Tuatha de Danaan.

The Milesians flourished, and traded with, and sometimes fought with, the Tuatha, and even occasionally married each other.  Centuries passed and there came a time when the Irish king Cormac determined that Ireland needed a standing army to defend the coasts of Ireland.  The army was called Fianna Eirinn, or the Fenians.  Three regiments were raised — 3000 warriors — and placed under the command of one Fionn mac Cumhail, or Finn mac Coul.  The legends of Finn and the Fenians are legion, but this story is about a young lieutenant named Ossian.

The Fenians were hunting near Lake Killarney when a lady of more than human beauty came riding up to them, and told them that her name was Niamh, daughter of the Son of the Sea.  Such was Niamh of the Golden Hair, Manannan’s daughter, that it was small wonder that, when she chose Ossian from among the sons of men to be her lover, all Finn’s supplications could not keep him.  Ossian mounted behind her on her fairy horse, and they rode across the land to the sea-shore, and then over the tops of the waves.  As they went, she described the country of the gods to him in just the same terms as Manannan himself had pictured it to Bran, son of Febal, as Mider had painted it to Etain, and as everyone that went there limned it to those that stayed at home on the earth.

As they went they saw wonders.  Fairy places with bright sun-bowers and lime-white walls appeared on the surface of the sea.  At one of these they halted, and Ossian, at Niamh’s request, attacked a fierce Fomor who lived there, and set free a damsel of the Tuatha de Danaan whom he kept imprisoned.  He saw a hornless fawn leap from wave to wave, chased by one of those strange hounds of Celtic myth which are pure white, with red ears.

At last they reached Tír na nÓg, the “Land of the Young,” and there Ossian dwelt with Niamh for three hundred years before he remembered Erin and the Fenians.  Then a great wish came upon him to see his own country and his own people again, and Niamh gave him leave to go, and mounted him upon a fairy steed for the journey.  One thing alone she made him swear — not to let his feet touch earthly soil.  Ossian promised, and reached Ireland on the wings of the wind.

But like the children of Ler at the end of their penance, he found all had changed.  He asked for Finn and the Fenians, and was told that they were the names of people who had lived long ago, and whose deeds were written of in old books.  The battle of Gabhra had been fought and the Fenians destroyed, and St. Patrick had come to Ireland, and made all things new.  The very forms of men had altered;  they seemed dwarves compared to the giants of his day.  Seeing three hundred of them trying in vain to raise a marble slab, he rode up to them in contemptuous kindness, and lifted it with one hand.

But as he did so, the golden saddle-girth broke with the strain, and he touched the earth with his feet.  The fairy horse vanished, and Ossian rose from the ground, no longer divinely young and fair and strong, but a blind, gray-haired, withered old man.

Stranded in his old age upon earthly soil, unable to help himself or find his own food, he was taken by St. Patrick into his house to be converted.  The saint painted to Ossian in the brightest colors the heaven which would be his own if he would but repent, and in the darkest the hell in which he tells Ossian his old comrades now lie in anguish.

Ossian replied to the saint’s arguments, entreaties, and threats in language that was extraordinarily frank.  He would not believe that heaven could be closed to the Fenians if they wished to enter it, or that God himself would not be proud to claim friendship with Finn.  And if it be not so, what is the use to him of eternal life where there is no hunting, or wooing fair women, or listening to the songs and tales of the bards?

Said Ossian:  “No, I will go to the Fenians, whether they sit at the feast or in the fire.”

And so he died as he had lived.